I tend toward making more abstract than realistic images with Blender. A while back I played with the Ivy Generator addon and so got interested in the underlying procedural algorithms for producing tree and plant structures. A lot of these techiques use L-systems and could maybe be implemented using the Sverchok Generative Art node. Except the Genertive Art node has no provision (yet) for collision avoidance. This results in intersecting branches which is not always what I want.

Somewhere in my research into procedural plants I came across the Space Colonization Algorithm which is a different approach to tree generation and decided to write this algoithm up as a Sverchok scripted node.

The Space Colonization Algorithim (SC Algorithm) was originally described in this paper by Adam Runions, Brendan Lane and Przemyslaw Prusinkiewicz.

There are good short descriptions of how the algorithm works on jgallant's blog or on Jose's Sketchbook.

The idea for the Space Colonization Algorithm is brilliantly simple: instead of generating the nodes that build our structure by using a set of rules (e.g. a grammar), we begin by producing a set of attractor points by sampling a domain -the surface of an object in our case-. Then we provide one or several start locations, and we iteratively start adding nodes by looking for the set of nearest active attractors, and growing towards them. When a new node is added, it kills all the attractor points which fall within a specified range, preventing other branches to fill in the same space, and directing the growth forward.

Here's a simple GIF showing the algorithm in action. The red points are the End Vertices or attractor points. There is one start point at (0, 0, 0). 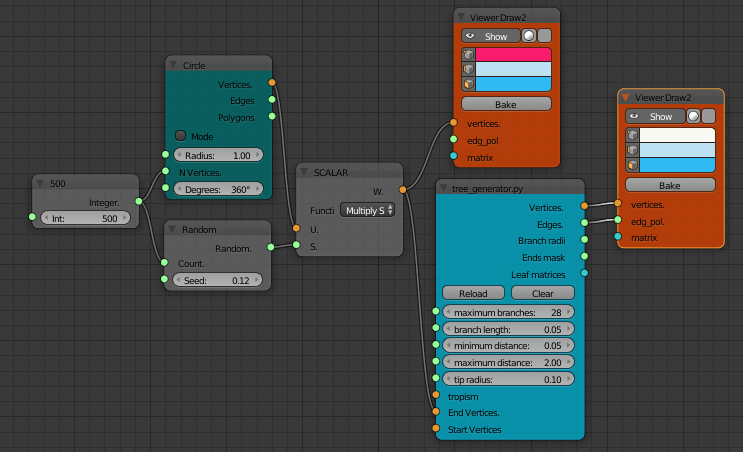 I started off looking at varkenvarken's github code but ended up completly rewriting it to use numpy. I then spent far longer than was reasonable optimizing my code to get a real-time response to parameter changes. The heart of the algorithm involves a large number of nearest neighbor searches. This is a classic problem with many solutions (kdtrees, octrees, locality sensitive hashing). I looked at some of these but the fastest solution I could code (before I got bored) was to naively calculate every distance using numpy outer product. The whole SC Algorithm would make a great class (or competition) challenge in code speed optimization as there seems to be so many complicated ways to make it slower.

Install the Sverchok addon into Blender. Download the Tree Generator code from github. Then load the python file tree_generator.py as a text blocks into a blend file. Add a Scripted Node to a Sverchok node tree. On the node select the tree_generator.py code from the lower drop down. Then click the plugin icon to the right of this field. The node should turn blue with some inputs and outputs.

Here is the Sverchok node diagram to produce the tree in the top image. A spherical cloud of atractor points is produced using the random vector and scalar nodes on the left. The Skin Mesher node is used to give thickness to the trunk and branches. The leaves are produced by the Mesh Instancer node. This make copies of a fairly simple leaf object (see insert) that has a image texture with an alpha channel. The textures are from EugeneKiver on blendswap. The modifiers on the tree trunk need to be applied before the UV texturing will work. 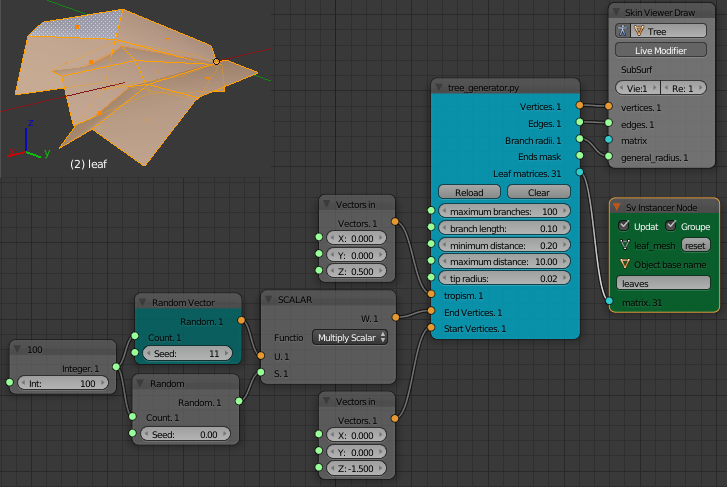 Here is another example (not so tree like) of what is possible with the Tree Generator. 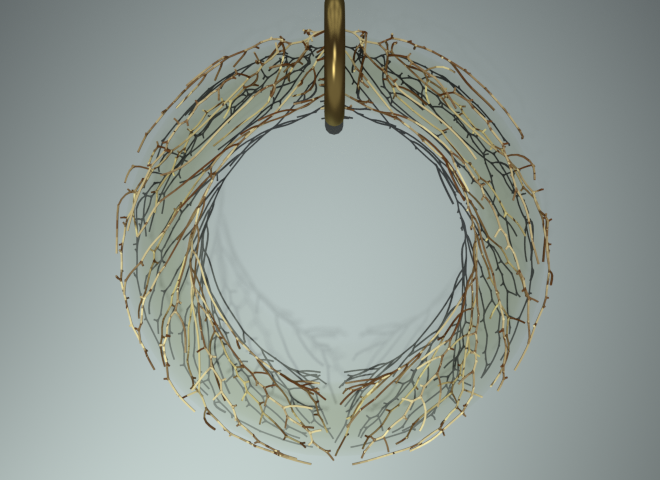 I like to code my Blender procedural experiments (maze any mesh, 2D mazes, 3D mazes, hyperbolic plane tilings, more hyperbolic planes, bloom spheres) as Sverchok nodes as I can concentrate on getting my code to produce simple lists (of vertices, edges, faces, and matrices) and Sverchok takes care of produing the actual mesh in Blender. The inputs and parameters provide a simple interface for the code without messing with the Blender API.

The obvious follow up to Painting in the Hyperbolic Plane and Symmetry Tile Painting in Blender is to do th...

I\'ve been reading Sandor Katz\'s book [The Art of Fermentation](http://www.wildfermentation.com/the-art-of...