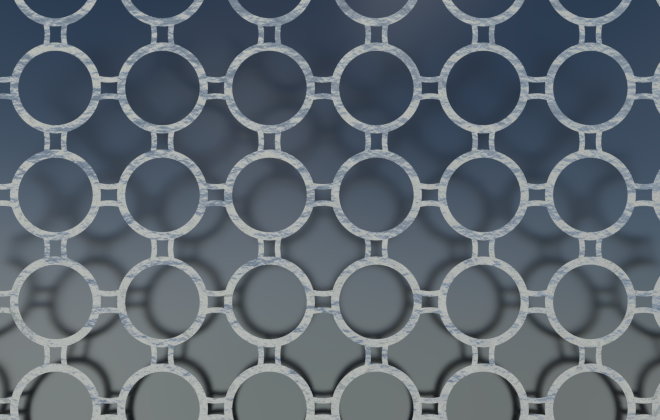 I've started learning how to write Cycles script nodes for Blender. These are written in Open Shading Language. A couple of good places to start are Michael Anders blog and book, the language specification and the last part of Jeremy Behreandt's article.

Here are my first experiments with a shader based on packing spheres onto cubic grid. The layering of shaders onto each other is inspired by a Blender Suhsi post.

Shaders make you think about pattern quite differently than when using a drawing package. The shader (as they're used here to create a procedural texture) take a pixel position on an object and decides what color to paint it. The shader is going to be called at least once per pixel and needs to be reasonably efficient, as the OSL script nodes in Blender are calculated on the CPU.

The shader function only knows about its inputs (and some global variables). It has no information, for example, about the color of neighboring pixels.

To draw spheres we need to decide whether the current pixel is inside or outside the desired spheres.

This first shader draws a single sphere. It calculates the distance from the Vector input point to the origin. It then creates a step function where the distance equals the radius and assigns the colors accordingly.

The input vector is assigned to P if no input is connected to this socket. P is a global variable that gives the world coordinates of the pixel being colored. If we move the object away from the origin, the texture will stay at the origin fixed in world space. 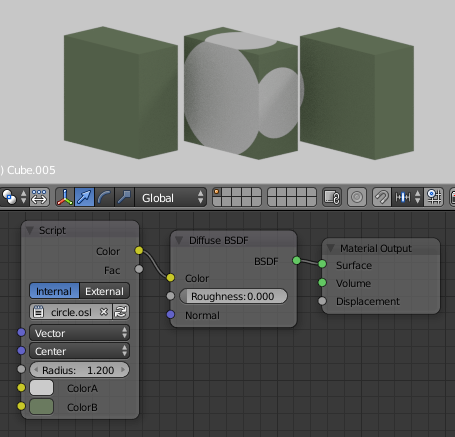 We can connect different texture coordinates to the Vector input to map the texture to the object in different ways. The most useful are Generated, UV and Object.

The Generated coordinates range from 0 to 1 on the three axes of the object bounding box. This is the default for the built in Cycles texture nodes. Each sphere starts at (0, 0, 0) of bounding box and extends halfway (Radius=0.5) along the box edge. 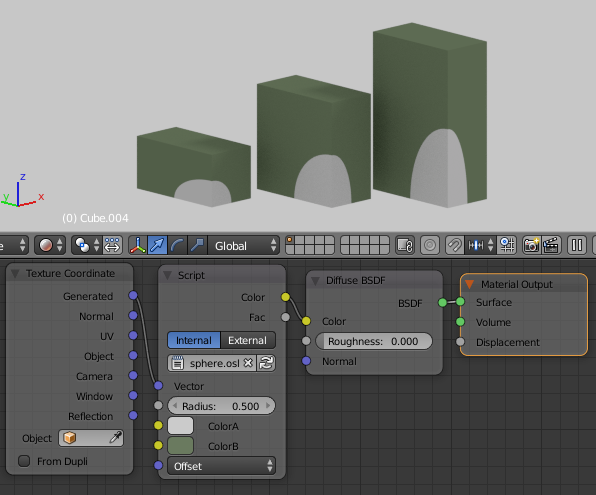 UV needs a UV map assigned to the object and works as usual. Here is a torus with the default Unwrap map applied. The Offset x-value was set to -0.5 to move the texture relative to the quads on the torus. 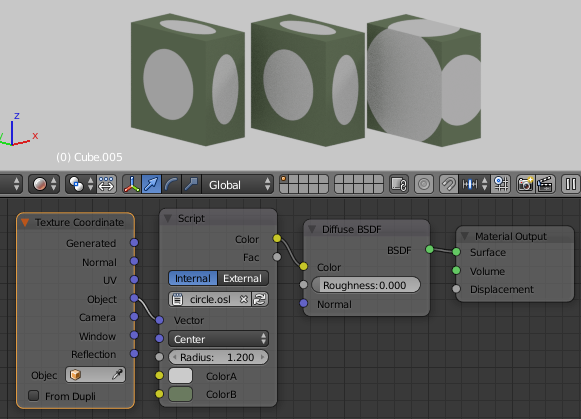 To draw an array of spheres we don't want to calculate the distance to every center point in the array and then decide which center point is the closest. This would be really inefficient. Instead we map each input point to a single unit of our pattern, and then do a minimum number of distance calculations.

For a cubic array this is fairly simple. We use the mod function to map every point into a single cube centered at the origin. For this shader I've added Blur, and Scale inputs. Increasing the scale puts more repeats of the pattern. The scale is a single value to match the built-in Cycles texture nodes. To scale different amounts in different directions use a Mapping node on the Vector input. The Blur input is used in the smoothstep function.

An easy way to confirm the shader is correct is to plug it into a volume shader. 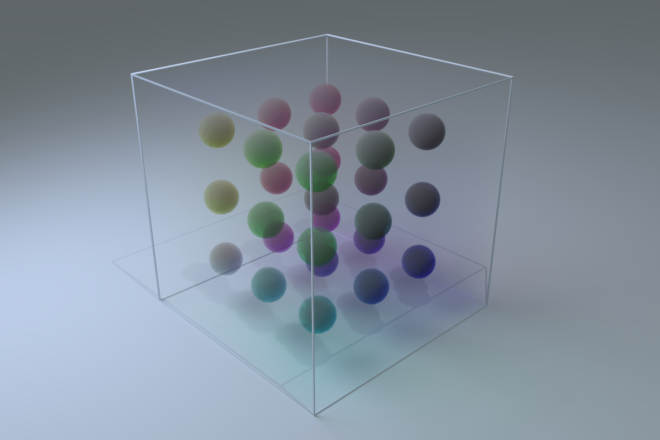 Using the shader for a volume shader 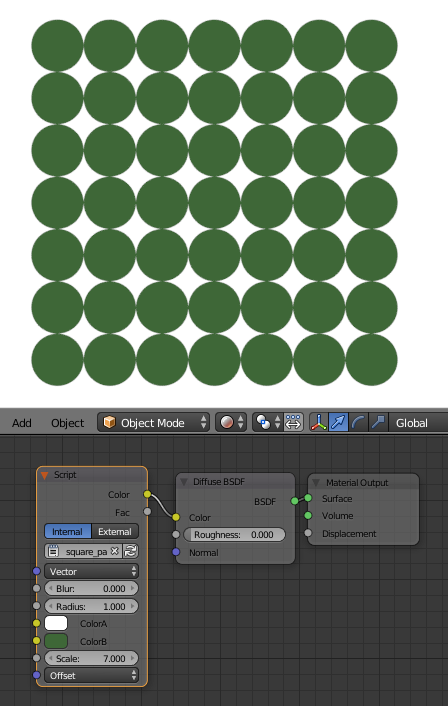 Using the shader on a plane

This fairly simple shader can be used to do some interesting things. 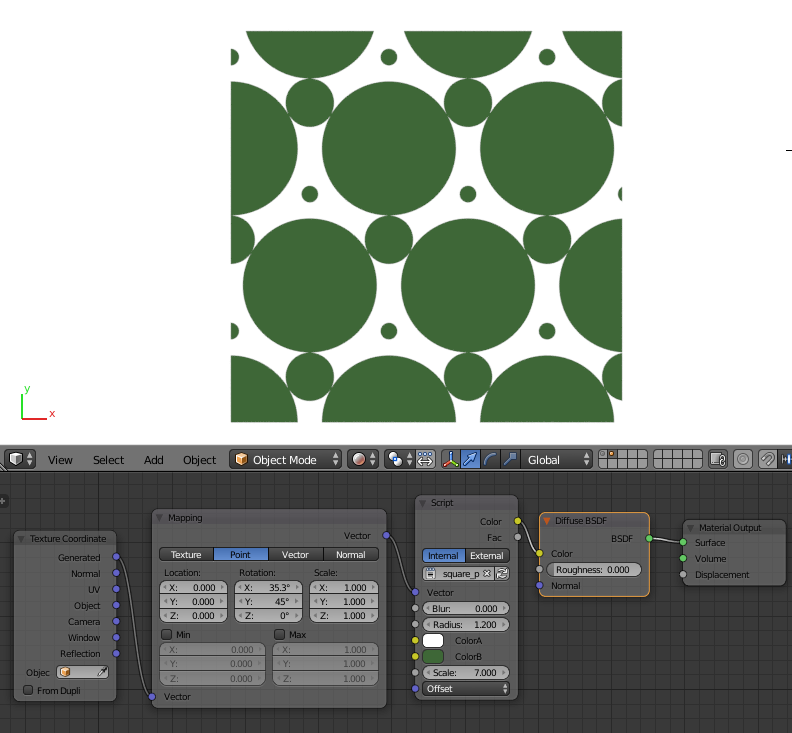 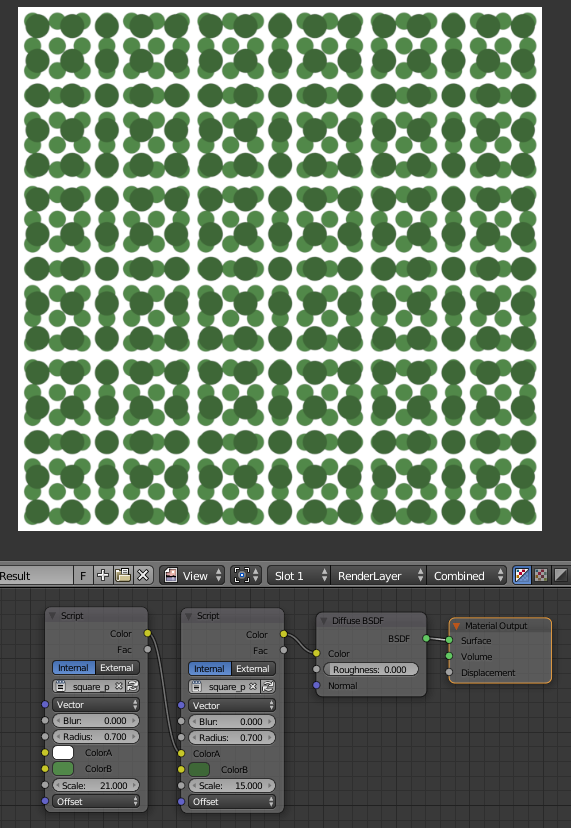 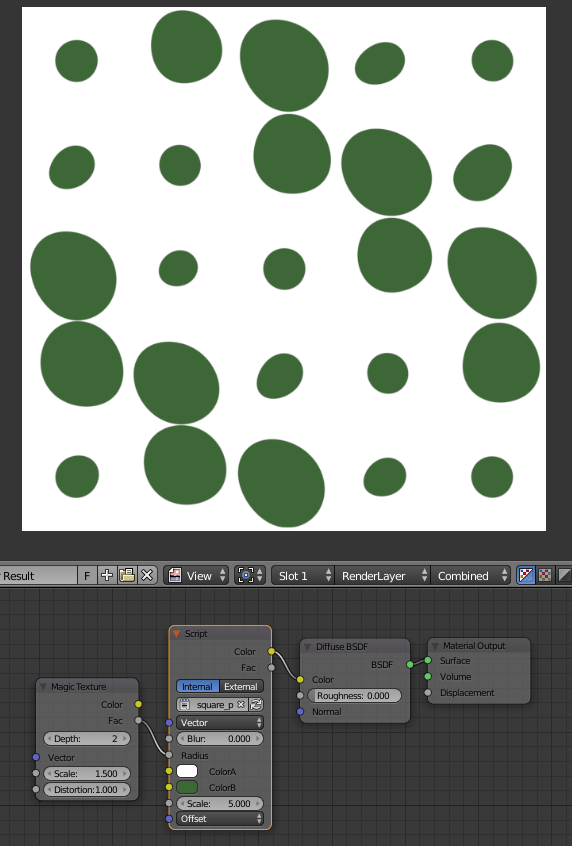 add a random texture to the radius 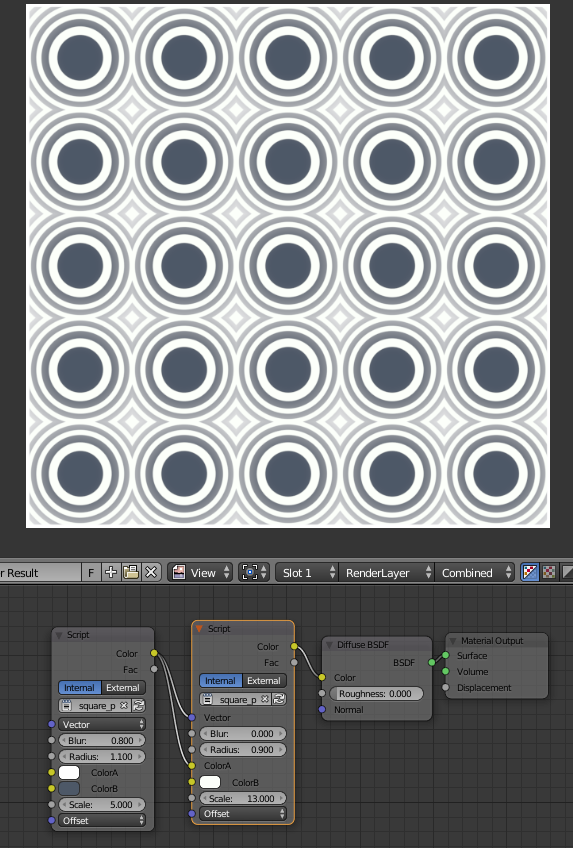 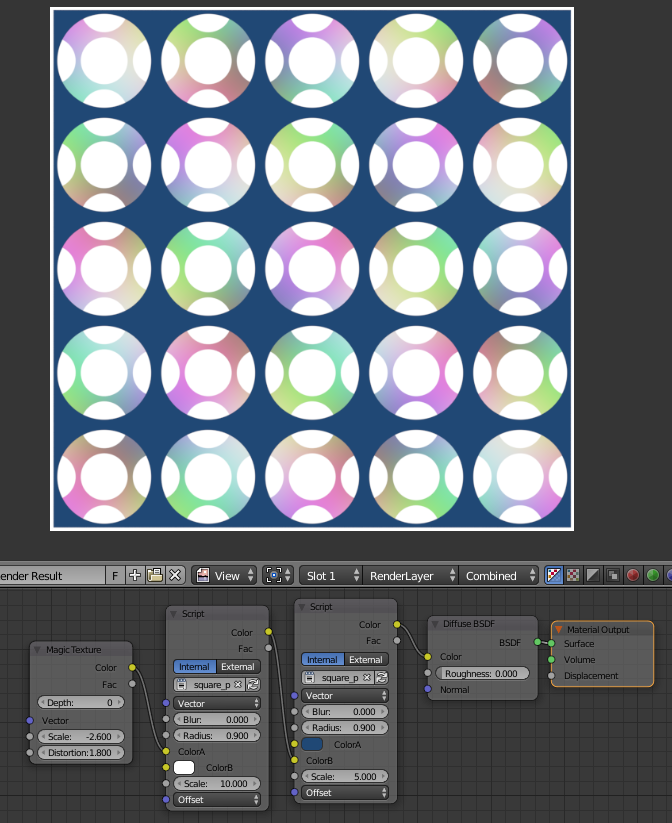