I've made some changes and improvements to the Generative Art node in Sverchok. This node uses a simple xml file to define a set of rules to produce geometry. This node is very strongly based on Structure Synth and can produce Lindermayer Systems (lsystems) and fractals as well as more random and interesting creations.

The new version is now merged into the Sverchok master branch on github.

I've changed the way the system state matrix accumulates when a rule has multiple call statements. This makes translated examples from Structure Synth work as expected. The change also makes the transforms for substitution tilings, fractals and things like the game level generator easier to calculate. This may break some previous xml definition files. I'm working on updating all the examples I've given in previous posts.

I've tested the new Generative Art node by checking it can generate various 2D and 3D fractals and translating some Structure Synth and Context Free Art examples. I'm using these tests to write up some future blog posts which should make a good demonstration of the nodes possibilities.

Here below, for reference is the documentation for the node. This can also be found in the Sverchok directory (/sverchok/docs/nodes/generator/generative_art.rst) or online

This node can be used to produce recursive three dimensional structures following a design specified in a separate xml file. These structures are similar to fractals or lsystems.

The xml file defines a set of transformation rules and instructions to place objects. A simple set of rules can often generate surprising and complex structures.

This node has the following parameters:

This node has the following inputs:

A simplified description of the algorithm for the evaluation of a design.

The xml file (see below for examples and descriptions) consist of a set of rules, each rule has a list of instructions, each instruction defines a transform and either a call to a rule or an instruction to place an instance.

The system is implemented by a stack where each item in the stack consists of the next rule to call, the current depth of the system and the current state of the system. At each iteration of the processor the last item is removed from the stack and processed.

A simple example of an xml design file:

This specifies the following design with 6 spirals.

Calls can be recursive. For the example above the first instruction in rule R1 also calls rule R1. This recursion stops when the max_depth value is reached or the max_mats value set in the node is reached. The max_depth can also be set separately for each rule and is added as an attribute eg <rule name="R1" max_depth="10">.

Each of these instructions can be modified with a set of transforms. If the transform is omitted it defaults to the identity transform.

A transform consist of translations, rotations and scaling operations. For example tx 1.3 means translated 1.3 units in the x direction, rz 6 means rotate 6 degrees about the z axis and sa 0.99 means scale all axes by 0.99.

The full list of transforms that take one argument : tx ty tz rx ry rz sx sy sz sa
In addition all three axes values for either a translation or scale can be applied at once with a triplet of values. For example: t 1.1 2.2 3.3 s 0.9 0.9 0.7

The count attribute specifies how many times that instruction is repeated. if count is omitted it defaults to 1. For example the instruction <call count="3" transforms="rz 120" rule="R1"/> calls rule R1 applying a 120 degree rotation about z in between each call.

An instance instruction tells the processor to add a matrix to the output list defining the state of the system at that point. The names used in the shape attribute are used as the names for the node's output sockets. If there is more than one type of shape each will have its own output socket.

There can be multiple definitions of the same rule in an xml file. 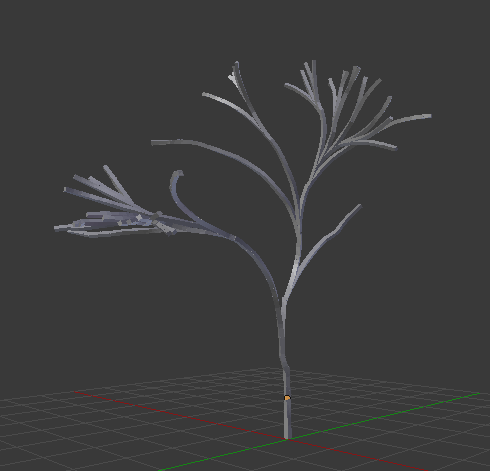 The first three definitions of the spiral rule all place an object instance and then call the spiral rule with the same translation along the z axis and rotation about the x axis but different amounts of rotation about the y and z axis. The fourth definition calls the spiral rule twice without placing an instance. This causes the branches in the tree structure. Changing the value of the weight attribute for this rule version will change how often the tree branches. For a larger weight value, the rule gets called more often and there are more branches.

If the weight attribute is omitted each version will have equal weight. Changing the value of r seed in the node interface will change the generated structure for xml files with multiple rule definitions. This example had rseed = 1.

This example needs "max matrices" set to 5000 to get the above result.

Using the matrices output allows a separate object to be placed at each location. The vertices input and the mesh (vertices, edges, faces) output "skins" the mesh into a much smaller number of objects. The vertices input should be a list of vertices such as that generated by the "Circle" node or "NGon" node. It could also be a circle type object taking from the scene using the "Objects In" node. The list of vertices should be in order so they can be made into a ring with the last vertex joined to the first. That ring dosen't have to be planar. 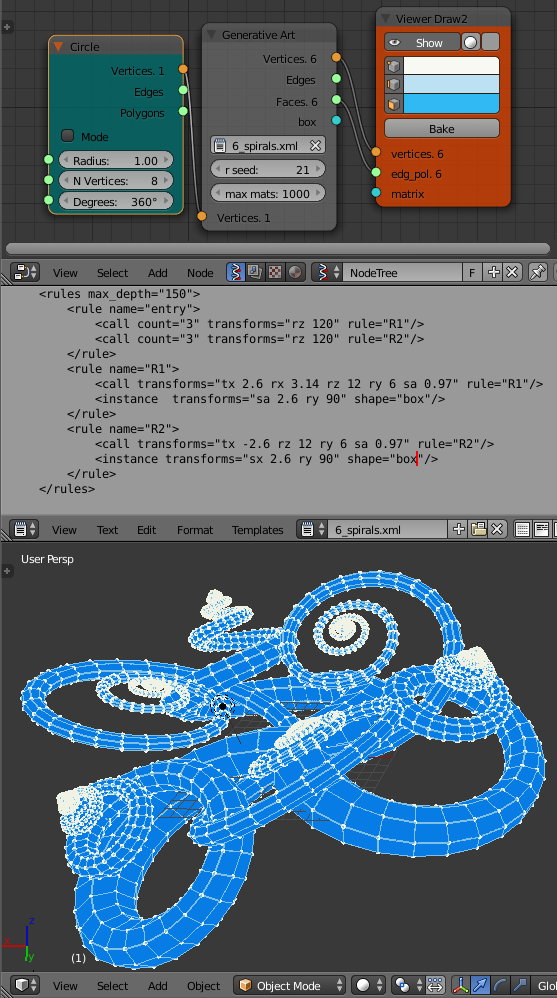 The output will not always be one mesh. If the rule set ends one 'arm' and goes back to start another 'arm' these two sub-parts will be separate meshes. Sometimes the mesh does not turn out how you would like. This can often be fixed by changing the rule set.

Often a mesh tube will turn out flat rather than being tube like. This can usually be fixed by either rotating the vertex ring in the scene or by adding a rotation transform to the "instance" commands in the rule set.

In other cases the mesh can be connected in the wrong order.

For example the following two xml files will look the same when the matrix output is used to place objects, but have different output when they are used in mesh mode. Both sets of xml rules produce the same list of matrices just in a different order.

Again these were both done with max mats set to 5000.

Constants and variables can be included in the xml file by replacing a numerical value with a pair of braces.

Constants are defined within the xml as follows:

Multiple constants can be defined within one element and several constants elements can be used as required in the xml file.

If a field name in between curly brackets is not given a value in a constants element then a named input socket will be added to the node. A Float, Integer or similar node input can be wired up to this input variable.

The example below uses a variable ({curl_angle}) to animate the amount of curl on the fern structure shown in the mesh mode example and two constants to fix the the value of the tz transform in the large curl and the scale ({sxy}) in all the curls.

For this animation the index number of the current frame in the animation is translated from the range 1 to 250 to the range 16 to 6 via the "Map Range" node and wired into the curl_angle input of the "Generative Art" node. This cause the fern to unwind as the animation proceeds.

Simple maths can also be use in the transforms definition. This has been used above in the curlsmall rule. The rx rotation of the transform will always be twice that of the rx rotation in the curl1 and curl2 rules. There cannot be any spaces in any maths expressions for the rotation, translation or scale parameters when using a single transforms attribute string. To allow for more complicated expressions each transform can be separated out into its own attribute.

transforms as single attribute (no spaces allowed in maths expression)

each transform with its own attribute (can have spaces)

All this is implemented by first using python's string format method to substitute in the variable value from the node data input. Then the resulting string is passed to python's eval() function. The string must evaluate to a single number (float or integer). Using eval() is a potential security problem as in theory someone could put some malicious code inside an xml lsystem definition. As always don't run code from a source you don't trust.

The python math and random modules exist in the namespace of the "Generative Art" node so for example a transform could be defined as:

Only the transforms that take a single number that is tx, ty, tz, rx, ry, rz, sx, sy, sz and sa have been implemented using individual attributes. The ones that use triplets to specify all three translations or scales at once (t and s) can only be used in a transform string.

This node is closely based on Structure Synth but the xml design format and most of the code originally comes from Philip Rideout's lsystem repository on github.

The grid of cells and list of links used as the data structure for 2D mazes by Jamis Buck's in his book "...

This post is hopefully the first in a series of examples and demos for the *Generative Art* node for the ...