After forgetting about it for a few years I found my old "copy 2" blender python script. (there's an old thread here).

I've completely rewritten it into a proper add-on with a panel interface. It now works in Blender 2.71. It can be downloaded from my github repository here.

The add-on copies an object to either the selected vertices, edges or faces of another object. Here are a couple of examples of the kind of output possible.

By making use of the random select in edit mode prior to using Copy 2 and the randomize transform afterwards, the add-on can be used to quickly greeble objects.

It can also be used to make ball and stick models of a mesh. Copy a sphere to the vertices and a cylinder to the edges. When copy to an edge is selected, the additional option to scale an object to the edge length is given. 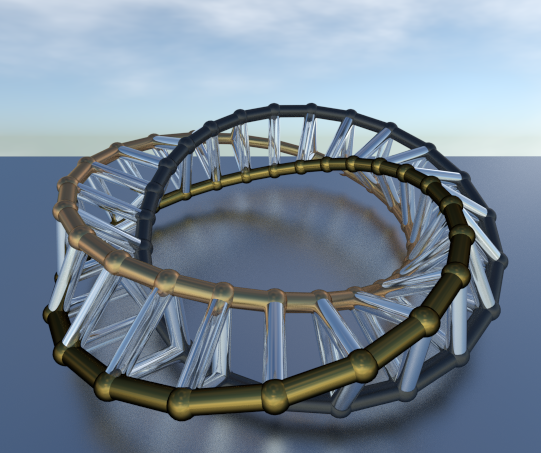 Install the add-on through the User Preferences dialog.

Create a destination object, use CTRL-A to apply any scale and rotation to the object.
In EDIT mode select the vertices, edges or faces to which you want to copy the source object.

In edge mode, the option to scale the source object to the length of the edge appears. One can also change the scale factor.

Otherwise click the axes alignment buttons until it looks right.

When finished the copied objects are selected, if desired further operators can be applied such as the Object > Transform > Randomize Transform.

The copied objects' data are also linked to the source object. This is useful to make further refinements to the scale or position of the source mesh relative to the source object origin. If this is not desired they can easily be unlinked. Select them all (select one, then Select > Linked > Object Data) then Object > Make Single User > Object & Data for one mesh per object.

The Blender 3D modeling and rendering package has an add-on for mathematically defined surfaces. It is enab...

Drop down and button select menus for Blender Operator add-ons

Note: Examples were tested in Blender 2.71 running on Linux Mint. While making the fancy new interface for...